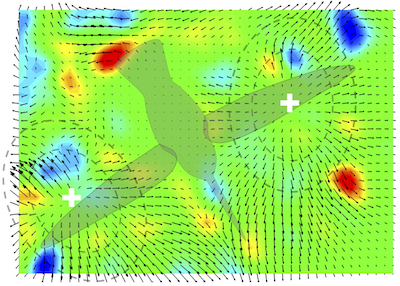 The aerodynamic forces and wakes produced by the deformable and flapping wings of animals are fundamentally different from those of fixed or revolving aircraft wings (Altshuler et al., 2005). We have recently made progress in explaining some of these key distinctions.

A perplexing problem in evolution has been the role of wing shape for animal flight. In earlier work, we mounted prepared animal wings and wing models onto a spinner to examine the role of airfoil camber and leading-edge sharpness on lift production and aerodynamic efficiency (Altshuler et al. 2004). Both morphological aspects led to an increase in the performance parameters, but real wings outperformed the wing models. More recently, we collaboratively studied the effects of aspect ratio, again using prepared wings and wing models on a spinner. For measurements with real animal wings, we found that wing aspect ratio did not influence the lift and drag produced, in agreement with previous studies. However, we found a strong effect of aspect ratio on aerodynamic power (Kruyt et al., 2014). This result pointed to a major distinction between flapping birds that have low aspect ratio wings, and gliding birds that have high aspect ratio wings. Using wing models, we demonstrated that low aspect ratio wings perform better at high angles of attack, whereas high aspect ratio wings perform better at low angles of attack (Kruyt et al., 2015).

Our current research on avian aerodynamics focuses on dynamic wing shape change, also called wing morphing. We are examining what shapes are possible, identifying those shapes used by birds in flight, and evaluating how particular aspects of wing morphing affect aerodynamic performance and stability.