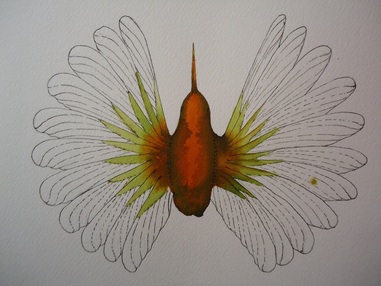 Flying animals in general and hummingbirds in particular are excellent models for studying many physiological mechanisms. They also have a diversity of specialized foraging strategies, mating displays, and migratory behavior. We combine studies of behavior, ecology, and evolution with biomechanical approaches to achieve greater understanding of how flight ability influences these broader patterns. Much of this work has focused on hummingbirds at different elevations, because this provides a natural experiment for challenging their flight performance. As elevation increases, hummingbirds compensate by having larger wings and using wider wing stroke amplitudes. These compensatory mechanisms lead to equivalent muscle power requirements for hovering at low and at high elevation. However, the maximum burst power that hummingbirds need for other behaviors such as mating displays and competitive chases, becomes more limiting as elevation increases (Altshuler et al., 2004a). This presents an opportunity to examine how behavior is constrained by muscle capacity.

Fieldwork in the Peruvian Andes and the Cordillera Central of Costa Rica produced a large dataset from over 70 hummingbird species including their morphology, wingbeat kinematics during hovering and load lifting, and their behavioral interactions at patches of flowers. We found that wing and body morphology did not influence which foraging strategies birds would use, or how effective they were at competing with each other (Altshuler et al., 2004b). However, the ability to general burst muscle power influences both behaviors (Altshuler, 2006). Additional fieldwork in the Colorado Rockies was conducted with a pair of territorial species that competes across 1000 m in elevation. At high elevations, where burst muscle power was very limited, it was the most important determinant of competitive ability.

We have recently been asking what determines competitive ability at low elevations, where burst muscle power does not seem to be limiting. We brought a high-speed tracking system to the field study competitive behaviors of hummingbirds in Costa Rica, Ecuador, Peru, and the U.S.A. (California). This work is being supported by a grant from the U.S. National Science Foundation.