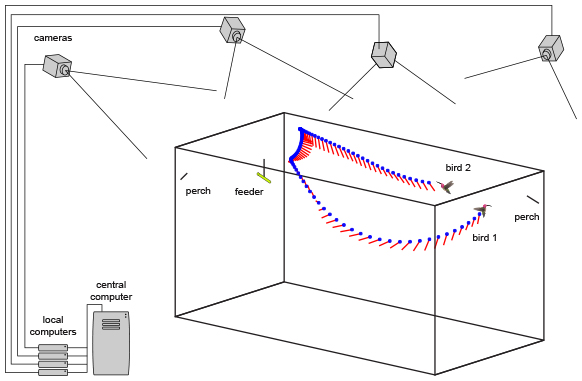 Flying animals are highly maneuverable but we lack a general understanding of the biomechanical and neuromuscular determinants of this ability. Our research has focused on two interrelated questions: 1) What drives individual variation in maneuvering performance? 2) What are the wingbeat kinematics used to control specific maneuvers? Our approaches include automated tracking of body position and orientation during free flight maneuvers, and high-speed filming of wingbeat kinematics as hummingbirds maneuver to follow moving feeders.

The automated tracking system produces a high volume of data. Our first study asked what is the relative contribution of competition, body mass, wing morphology, and muscle capacity to different types of maneuvers in Anna’s hummingbirds (Calypte anna). Surprisingly, body mass was not related to maneuvering performance, and wing morphology and competition were associated with only a handful of maneuvers. Instead, muscle capacity, as measured through load lifting, was the strongest predictor of maneuvering overall (Segre et al., 2015). In a subsequent study, we transplanted a group of Anna’s hummingbirds to different elevations to test if altitude influenced maneuverability. Because maneuvering performance declined substantially at high elevation, we next performed an experiment in which we manipulated gas composition. This revealed that the decline in maneuvering performance with elevation was driven by changes in air density not oxygen availability (Segre et al., 2016).

One of the most interesting results from the free flight studies was that Anna’s hummingbirds engaged in two types of turns, pitch-roll turns, which require slowing down but can lead to turns as high as 180°, and arcing turns, which can be performed faster but result in small angle change. Moreover, the ratio of the two types of turn was the only aspect of free flight maneuvering that was influenced by competition, wing morphology, muscle capacity, and elevation. We performed two feeder tracking studies to investigate how the two types of turn are executed. When birds turned in place while tracking a feeder revolving around them, they moved the left and right wings with a high degree of independence (Altshuler et al., 2012). We studied arcing turns by independently manipulating turn radius and turn velocity. This experiment revealed that hummingbirds shift their bodies in response to changes in angular velocity, and use asymmetries in left and right wing motion to respond to changes in turn radius (Read et al., 2016).