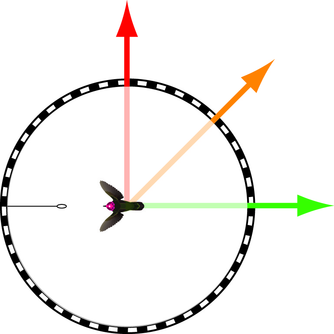 Flying birds use diverse sensory information to guide their flight, and the available evidence suggests that visual information plays a prominent role in flight control. For example, the avian midbrain in general, and the optic tectum in particular, are relatively much larger than homologous regions in other vertebrates. Although there is considerable information available about the neural circuitry for sensing and processing visual motion in birds, there is a major gap in our understanding of how motion perception is used during flight. Our research aims to unify behavioural studies of visual guidance with electrophysiological and immunohistochemical investigations of neural circuitry to determine the algorithms that birds use for flight control.

Our studies of visual guidance make use of virtual reality arenas in which we can manipulate the visual environment while tracking animal motion. We asked how hummingbirds use visual information to hold a constant position during hovering, and demonstrated high sensitivity to global visual motion during hovering. When we provide motion in any of three axes (left-right, forward-backward, up-down), birds drift in the same direction as they attempt to minimize visual motion. If we offset the center of visual motion, they will also respond with mirrored drift. These responses are maintained even when tested over days, and even when the motion is small and displayed in the presence of prominent stationary features (Goller and Altshuler, 2014). In a second major study, we asked how hummingbirds guide forward flight. Because forward flight in insects is governed by the control of pattern velocity, we first asked if birds use the same algorithm. Unlike insects, hummingbirds did not adjust their lateral trajectories in response to horizontal pattern velocity, but they did adjust their altitude to vertical motion. Through several additional experiments, we found that lateral course control is best explained by balancing visual expansion, which is an important cue of a potential collision (Dakin et al., 2016).

The neural circuits used for processing visual motion are now well-described for pigeons, but we know much less about how visual information is transformed into motor commands for flight. Because our previous work indicated that hummingbirds control hovering flight by attempting to eliminate visual motion along all three major axes, we tested the direction and speed preferences of neurons in the avian lentiformis mesencephali (LM), a key nucleus for encoding global visual motion. In the zebra finch, we found that most LM neurons prefer motion in the back-to-front direction, which is what has been recorded in all tetrapods studied to date. However, hummingbirds are unusual in that the population of LM neurons prefer many different directions. Thus, the unique response properties of the hummingbird LM provide a potential mechanism for the visual guidance of their hovering flight (Gaede et al., 2017).